Brave has gathered evidence on the biggest data breach in history. Every day, the online ad industry broadcasts what every Internet user reads and watches to thousands of companies, hundreds of billions of times a day. Together with 21 privacy activists and organizations, Brave is using the GDPR to end it.

20 February 2019 Further evidence is submitted, including sample bid requests, IAB correspondence, and material on the scale of and lack of control in RTB system. Read more.

20 May 2019 The complaint is extended to four more countries. The new complaints are filed by Gemma Galdon Clavell of Eticas Foundation, David Korteweg of Bits of Freedom, Jef Ausloos of University of Amsterdam, Pierre Dewitte of University of Leuven, and Jose Belo of Exigo Luxembourg. Read more.

20 June 2019 The UK Information Commissioner’s Office publishes a report that confirms and vindicates the complaint and accompanying evidence. However, the ICO fails to take any action. Read more.

8 October 2019 The Belgian Data Protection Authority confirms in writing to Ausloos and Dewitte that it is investigating the IAB.

31 December 2019 The ICO’s six month grace period for the RTB industry ends. No substantive action is taken or proposed by the industry to end the RTB data breach.

17 January 2020 The ICO announces that it will take no immediate action to stop the ongoing RTB data breach. Read more.

This note analyses additional granular data from Dutch publisher NPO, and presents lessons for the publishing industry about privacy and revenue based on six months of data from a publishing group that removed 3rd party tracking.

Procter & Gamble invited Dr Johnny Ryan of Brave to give a (remote) keynote about how advertisers should adapt to the privacy-first future.

Industry discussion on the GDPR at 2 years old, and future EU regulatory development

Senior representatives of advertisers, publishers, and intermediaries discuss two years of the the GDPR in a discussion hosted by Brave. 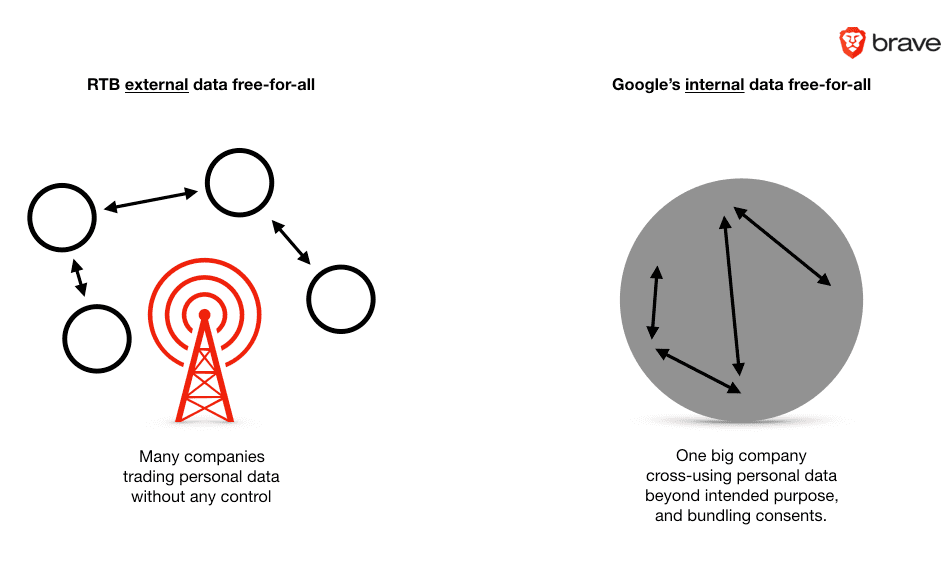 Brave has written to the US Senate and Congress Homeland Security Committees about a serious national security vulnerability. 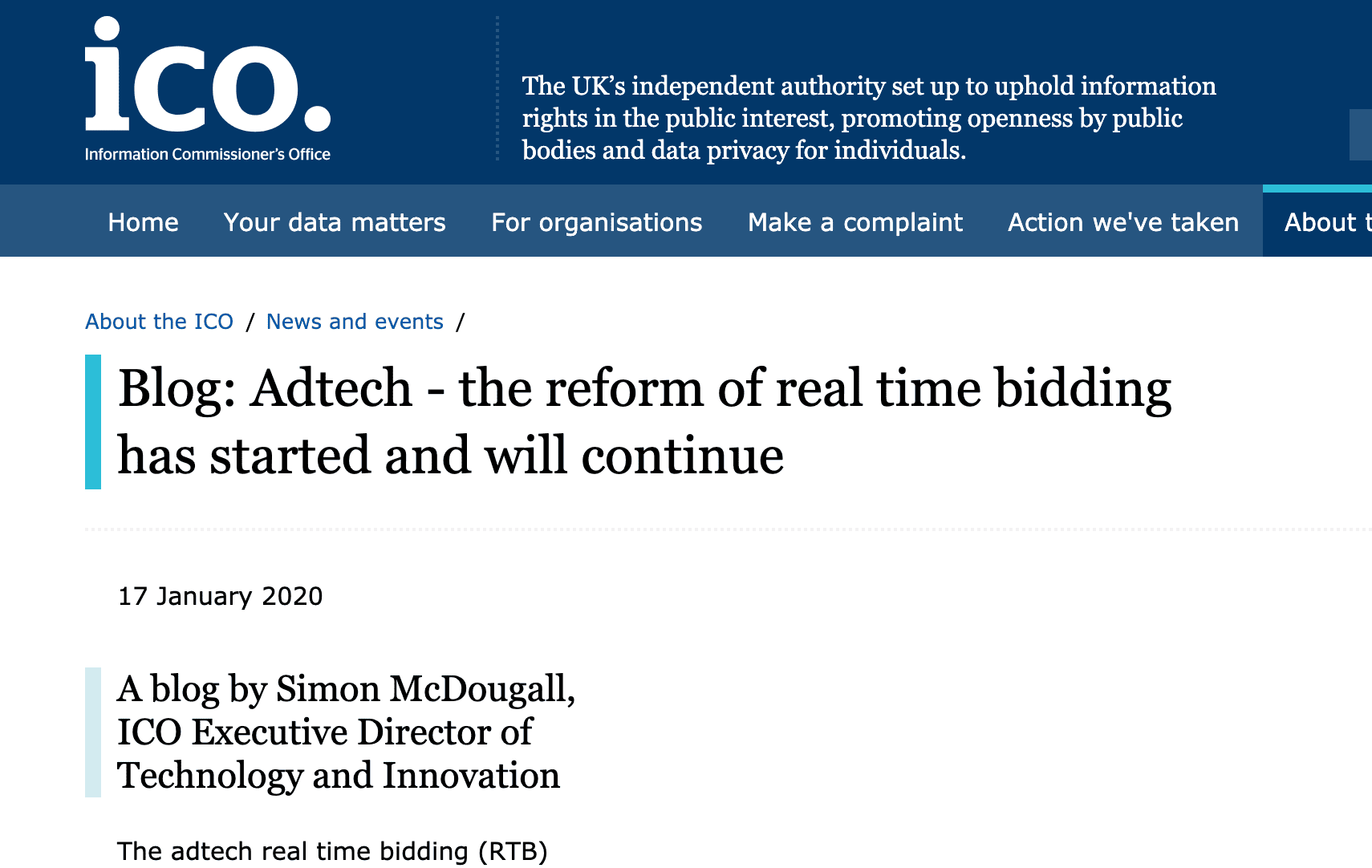 This note highlights the inadequacies of Google and IAB proposals to reform RTB, and rebuts the argument for inaction.

The ICO’s failure to act on RTB, the largest data breach ever recorded in the UK

The ICO has today announced that it will be taking no substantive action to fix "RTB", the largest data breach ever recorded in the UK. Regulatory ambivalence cannot continue. We are considering all options to put an end to the systemic breach, including direct challenges to the controllers and judicial oversight of the ICO. 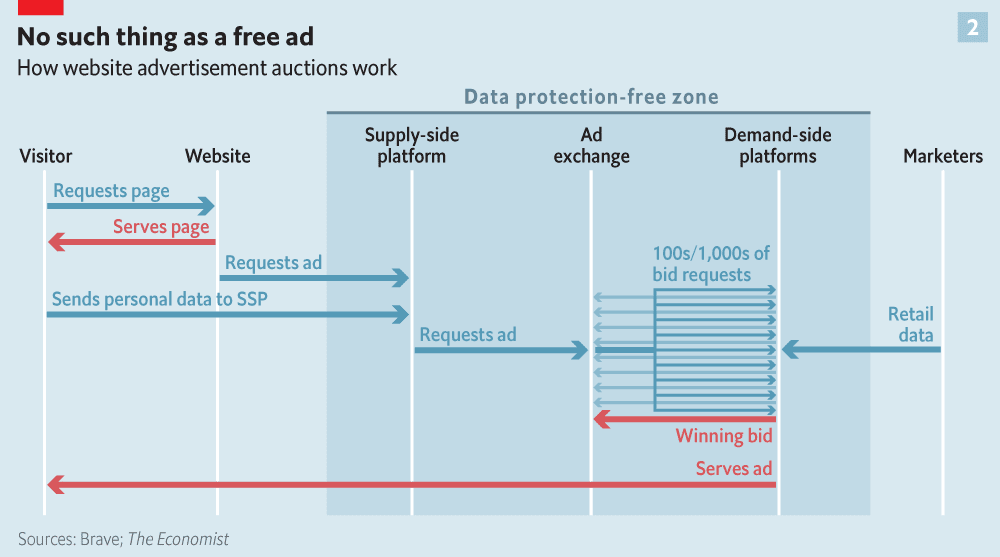 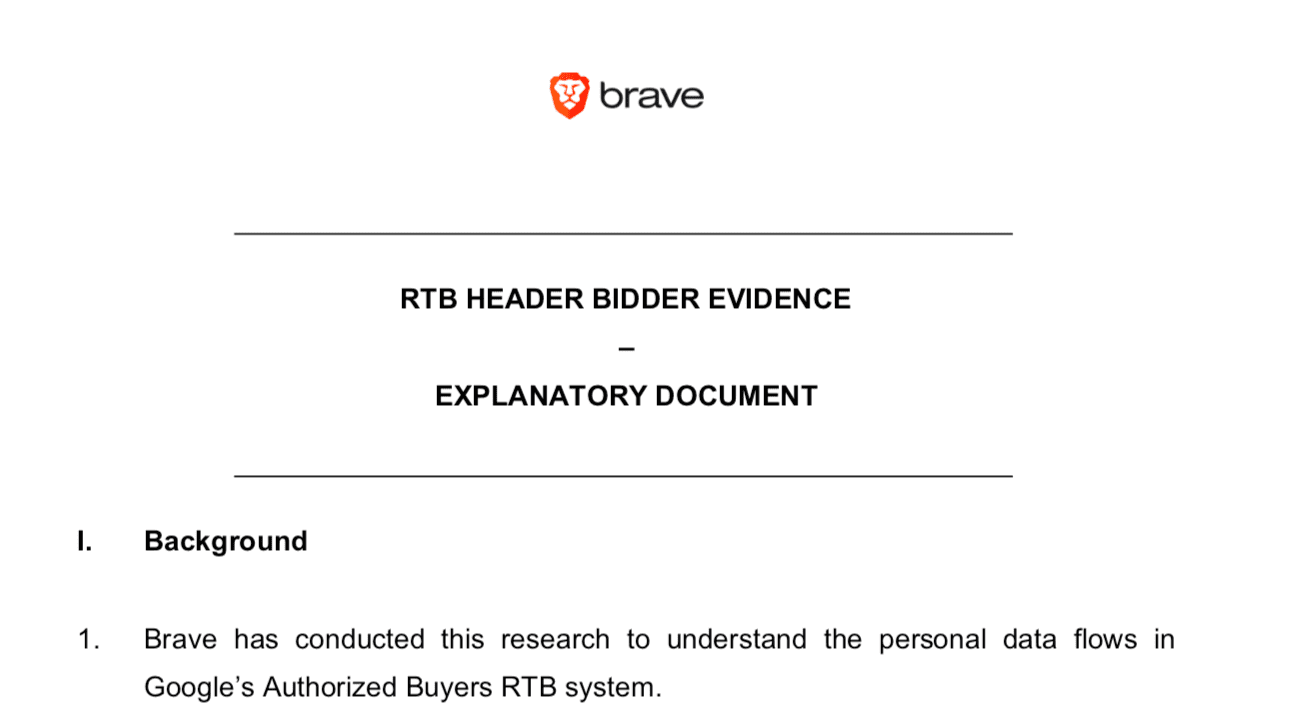 Brave presents new RTB evidence, and has uncovered a mechanism by which Google appears to be circumventing its purported GDPR privacy protections. 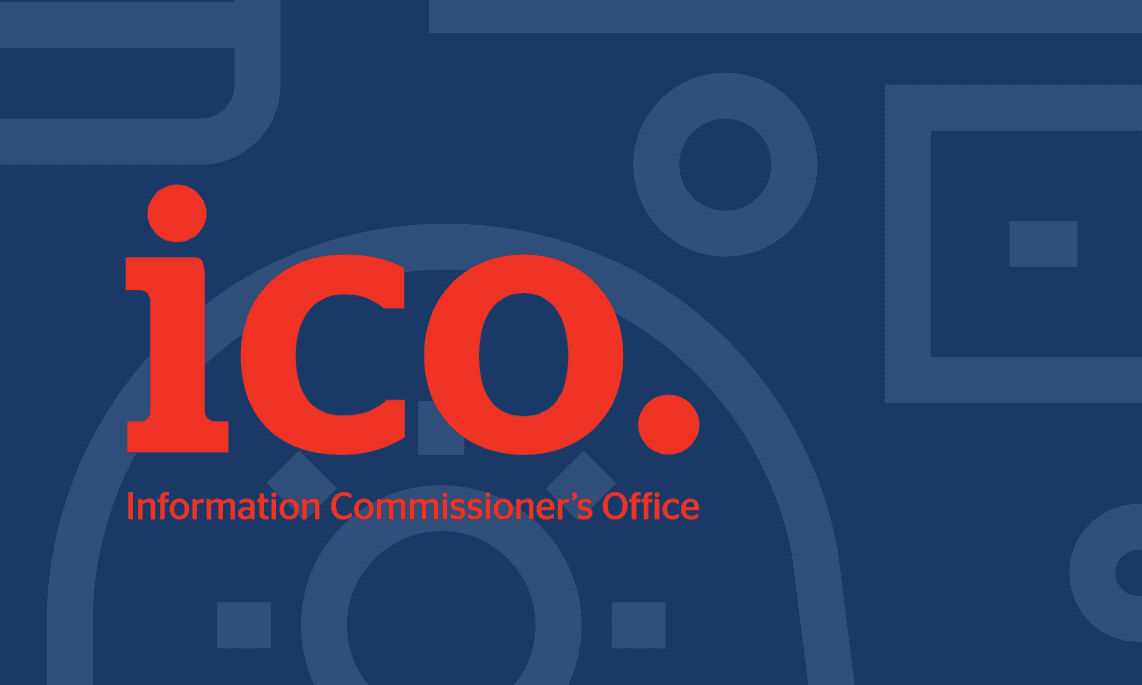 This note summarizes the ICO report on real-time bidding, which vindicates the GDPR complaints initiated by Brave, and points toward the solution. 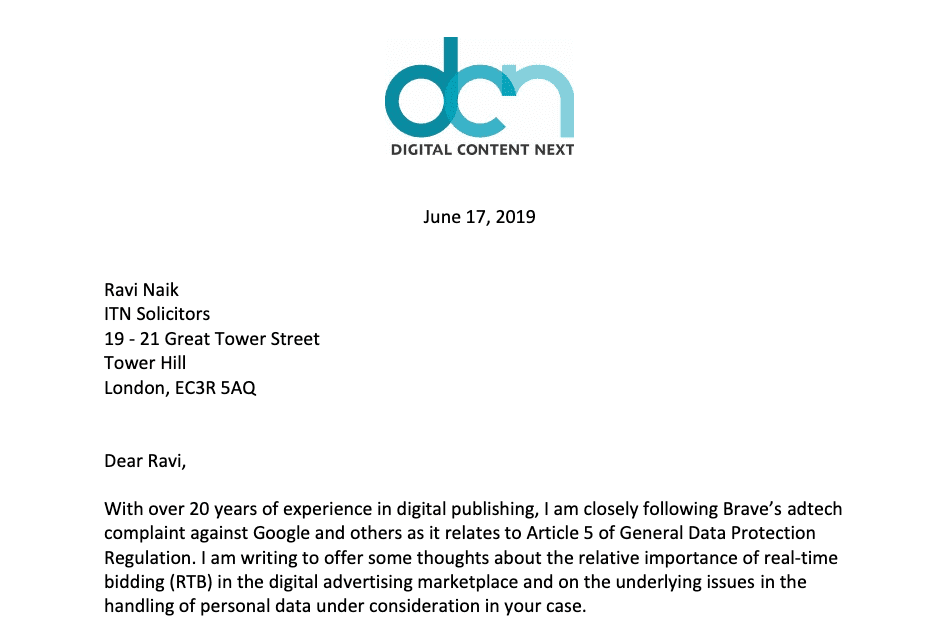 Google faces first investigation by its European lead authority for “suspected infringement” of the GDPR, following formal complaint from Brave 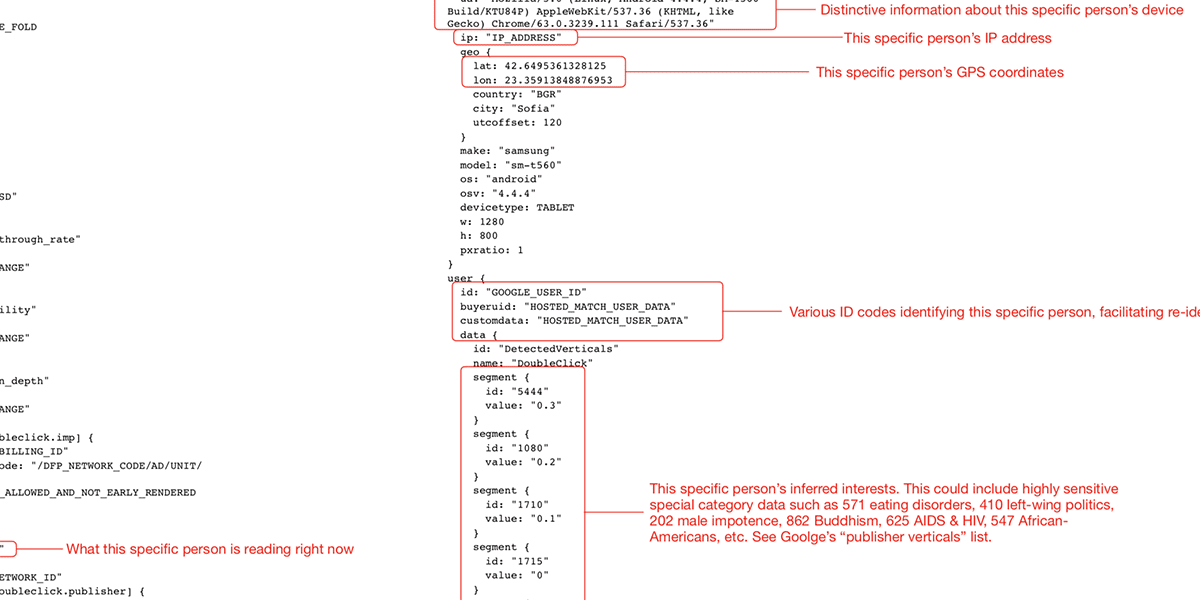 GDPR complaints about Real-Time Bidding (RTB) in the online advertising industry were filed today with Data Protection Authorities in Spain, the Netherlands, Belgium, and Luxembourg.  The complaints detail the vast scale of personal data leakage by Google and other major companies in the “Ad Tech” industry. This week marks one year since the introduction of the GDPR. 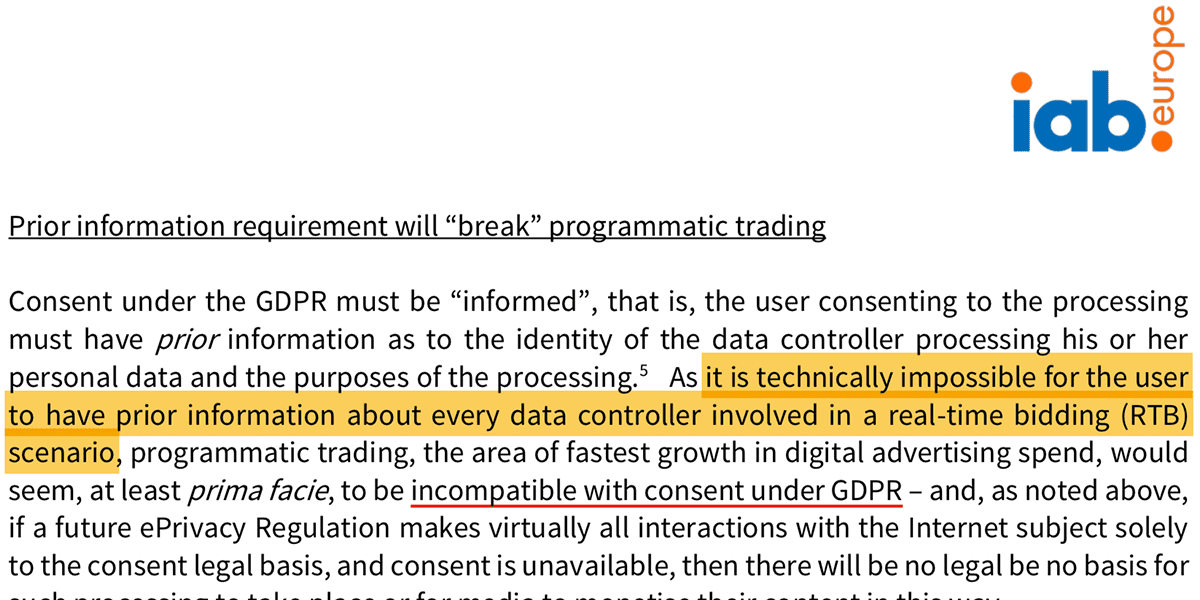 New evidence to regulators: IAB documents reveal that it knew that real-time bidding would be “incompatible with consent under GDPR”.

New evidence to regulators: IAB documents reveal that it knew that real-time bidding would be “incompatible with consent under GDPR”.

Brave and co-complainants in Poland, Ireland, and the UK submit new evidence about massive adtech leakage of highly intimate data.

Today, Brave writes to the IAB (an ad tech trade body) in response to IAB TechLab’s request for feedback on the beta version of OpenRTB 3.0. 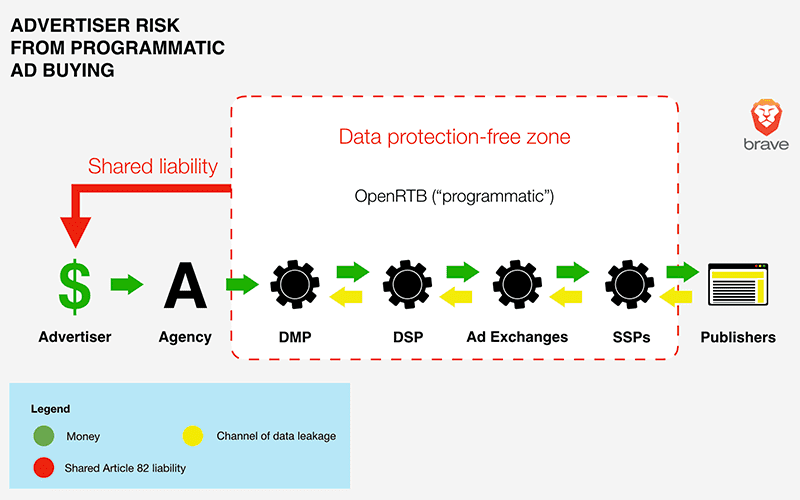 16 July 2018: A ruling of the European Court of Justice last month exposes marketers to severe legal risk from programmatic advertising.

Brave Talk for meetings! Free, private video calls. In the browser, and now in Google Calendar!