New fully rebuilt Brave for Android boosts performance across the board compared to prior versions: 5% battery savings along with 3% of both data and CPU savings

Results from the experimental evaluation in this blogpost were produced by Dr. Matteo Varvello, performance researcher at Brave.

The new Brave app for Android (version 1.5.120) is now available for download on the Play Store and has been completely rebuilt over the past few months. The new release is based on the same Chromium code repository as our Brave desktop release, and will allow for easier implementations of features and fixes across desktop and mobile thanks to a unified codebase. For example, this unified codebase will enable support for extensions in Android in the future.

This new version is a seamless transition for Brave users as the user interface remains the same, but it does provide performance enhancements such as battery savings (5%), as well as CPU and data savings (3%), compared to the previous version (1.5.9). These savings are additional to the savings that Brave already realized when compared with major browser vendors (30%-50% bandwidth and battery reduction compared to Chrome, Firefox, and Opera) [1]. In addition, these savings make Brave for Android outperform DuckDuckGo, Vivaldi, and Firefox Preview as well, which were recently ranked as top performing browsers by Greenspector [5].

Because browser performance is paramount at Brave, we have developed the first solution for CI battery testing (and more) on mobile devices. That is, each new version of Brave is tested against its predecessor to guarantee no performance regression. This is realized atop of Batterylab, https://batterylab.dev/ [3], a distributed platform for battery measurements we have realized in collaboration with Imperial College of London and Northwestern University.

In the following, we focus on the results obtained when comparing brave-core-android (version 1.5.120) with the last version available from the previous codebase (version 1.5.9). In this test, we instruct each browser version to load sequentially the top 10 news websites [4]. Further, we simulate simple user browsing behavior on each page by scrolling up and down multiple times. We present results obtained from a Samsung Galaxy J3 (OS: Android 9.0, CPU: quad-core 1.4 GHz Cortex-A53, Memory: 2GB LPDDR3, Battery: 2,600mAh) on a fast WiFi network in North America.

The figures below directly compare the two Brave versions with respect to CPU, energy, and data consumption. Each bar shows the average out of 5 runs along with error-bars reporting the standard deviation. The below results show a significant performance boost provided by our new codebase: 3% CPU savings, 5% battery savings, and a staggering 18% bandwidth savings. Note that these savings are additional to the savings that Brave already realizes with respect to the major browser vendors [1].

The majority of the bandwidth savings measured for version 1.5.120 are associated with the load of https://www.sfgate.com/ which reduces its bandwidth footprint from an average of 19MB (version 1.5.9) to 13.5MB (version 1.5.120). This is an artifact of Brave’s auto-play which behaves differently between the old and the new codebase. To gain a more accurate understanding of the latter result, we compare the bandwidth consumption of version 1.5.9 and version 1.5.120 when loading Alexa’s top 1,000 websites [8]. This experiment produces, respectively, 1.67 GB (1.5.9) and 1.62 GB (1.5.120) of data, indicating a more realistic 3% data saving. Note that results actually refer to 717 websites we have selected from Alexa’s top 1,000 list to avoid inappropriate content.

Next, we compare our fully rebuilt Brave for Android against the top 3 best performing browsers of 2020 as indicated by Greenspector [5]: DuckDuckGo [6], Vivaldi [7], and Firefox Preview [8]. Brave offers significant battery, bandwidth, and CPU savings compared to both Vivaldi and Firefox Preview (30-50%). DuckDuckGo is instead a much closer competitor, although Brave still manages to considerably reduce CPU consumption (e.g., the median from the Cumulative Distribution Function below shows a 5% reduction), bandwidth (28 versus 32 MB, or about 10%) as well as few mAh of battery savings.

To explain the significant bandwidth savings that Brave provides compared to DuckDuckGo, the figure below shows a per URL summary of the MB consumed by each browser. We can see that Brave reduces bandwidth consumption on 8 out of 10 of these websites. However, the majority of the data savings derive from https://www.sfgate.com/ due to video auto-play as discussed above. For only one website out of 10, https://cnet.com, DuckDuckGo consumes less bandwidth (200 KB on average) than Brave. 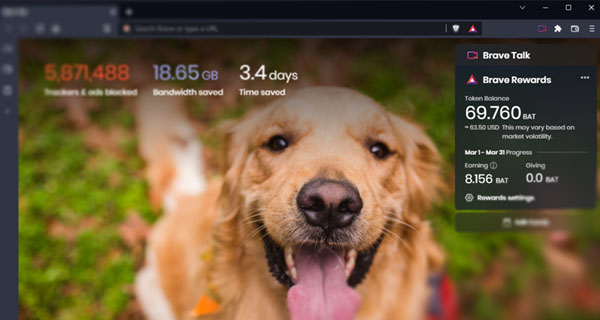