This blog was written by Samuel Dare, Blockchain Engineer at Brave

Marching towards Brave’s mission to create a decentralised ecosystem for digital advertising that respects user’s privacy, we aim to incrementally decentralize components of our architecture as they relate to the Basic Attention Token (BAT) as well as Brave’s advertiser and publisher ecosystem. We also aim to maintain or improve the performance, security and privacy guarantees which the BAT ecosystem currently offers.

Public blockchains (like the Ethereum Mainnet) are open networks, allowing anyone to both add and verify data in the network. This guarantees a high level of decentralization2, non-repudiation3, and censorship resistance at the expense of :

While Ethereum Clients are a core component of Web 3.0, and there are many such clients already developed, the lack of standardisation across them makes it difficult to test the technology.

To remedy this and enable testing on a level playing field, we created Mjolnir. Mjolnir is a tool for deploying and benchmarking Permissioned Ethereum Blockchain implementations easily. We hope that other teams can benefit from the results and use the tool for their testing.

To assess the effectiveness of our tool, we evaluate Mjolnir using two permissioned blockchains:

While Quorum has the benefit of being the most deployed permissioned client, HBBFT’s finality, asynchronous safety, and selective-censorship resistance are the properties we believe help abate some commonly expressed concerns over the use of permissioned systems.

While in our experiments, Quorum outperformed with regards to throughput, HBBFT fared better when faced with clock skew and had a better memory profile, consuming less memory for every new node added to the cluster.

The Mjolnir system can be grouped into three components (Figure 1): (1) the deployment, (2) testing, and (3) monitoring components. Each component is divided into subcomponents, so let’s dive into each of them:

These components help configure, validate, and build the nodes. They leverage Terraform and Amazon Web Services and bundle all functionality in a CLI. Let’s see what each of the subcomponents do:

CLI: The CLI provides a user-friendly entry point to the Mjolnir toolkit. The user needs only to update a YAML file with their desired settings and execute a subcommand with the YAML file. The CLI instructs Terraform to deploy the requisite infrastructure to the target environment, which in our case is AWS.  In addition to this, it also acts as a management console for the cluster.

Terraform: Terraform is a tool for declaratively managing cloud-based infrastructure and service by way of the Infrastructure as Code paradigm. Being declarative means that it builds according to a target state, making it easier to reason about the codebase.

Amazon Web Services (AWS): As mentioned above, our target environment is AWS.  Services currently employed include (but are not limited to):

These components are responsible for initiating and collecting results on the tests suite. They include Chain hammer, libfaketime and pumba:

Chain hammer: This is a collection of python scripts that rapidly sends asynchronous transactions to an Ethereum node.

libfaketime: This library allows us to intercept system calls made within the containers and return values modified by the user. With this, we were able to simulate clock skew between the containers.

Pumba: This is a tool for Chaos testing and network emulation within containers. While it’s functionality doesn’t quite match Netflix’s Chaos Monkey, we found it suitable for simulating both partial synchrony and asynchrony within the containers running the Ethereum nodes.

The monitoring component collects and shows data from the tests.

Grafana: Collects time series data and presents it in dashboards which help to visualize and analyze how the Ethereum nodes perform over time. The dashboards enable us to understand any exceptional node and network behaviour.

Loki/Prometheus: We use log aggregation systems which are responsible for steaming logs and metrics from the ECS instances to Grafana.

In order to show-case Mjolnir’s features, we set to compare the performance of a Quorum-based blockchain with a Parity HBBFT-based blockchain. In order to do so, we leverage the components described in the section above to spin up, orchestrate, and monitor the cluster using Mjolnir.

The table below outlines the different configurations of the tested clients. Both clusters were deployed on AWS with each validator node running on its own EC2 instance.

One important metric is the transactions per second that the blockchain can achieve. Often a functional requirement in most Blockchain systems, TPS is a proxy for throughput as it measures how fast the client can reach consensus on the next block and propagate it through the network. In our experiments, while Quorum achieves a max TPS of 890, HBBFT reaches 790 TPS.

A large number of consensus mechanisms make strong synchrony assumptions, which render the protocols fragile to discrepancies between the system clocks on the nodes in the cluster.  It is important to note that this refers to changing the time in the containers and not the host VM. Testing the effect of clock skew on the host is outside the scope of this exercise.

We measure the increase in the memory consumption of the clients as we increase the number of nodes in the consortium. This is a proxy for communication complexity, as we imagine that the nodes have to do more work to broadcast messages.

In this blog post, we present Mjolnir: a tool for  developers to easily deploy and test different Ethereum Permissioned Blockchain implementations. We outline the architecture of Mjolnir and how it can help with comparing different permissioned blockchain clients. In addition to presenting Mjolnir, we used it to deploy and compare Quorum against HBBFT based blockchains. Overall, both implementations seem promising, with Quorum leading the race in throughput, and HBBFT presenting an innovation in permissioned consensus. We would like to see further experiments with regards to the geographic distribution of nodes and sending transactions round-robin style to different nodes within the consortium, as we believe it aligns closer to real scenarios. We are providing Mjolnir open-sourced and publicly available, aiming to help the community to iterate through their blockchain ideation/deployment process quicker. There is still more to be done, therefore we call on contributors to help both maintain and augment Mjolnir’s capabilities.

Keeping the web open to everyone with built-in privacy protections and significant efficiency gains. This blog was written by Dr. Andrius Aucinas, Dr. Matteo Varvello, performance researchers at Brave, and Dr. Ben Livshits, Brave’s Chief Scientist. In 2019,  Brave reached a major milestone with the release of the 1.0 version. As ever, web browsing performance is a key priority for Brave, so we set out to evaluate in detail how it stacks up against the competition and devised a methodology for doing so. In our “1.0 reviewer guide”, we summarized the significant savings Brave users can expect.  In the spirit of transparency, we here present our methodology and detailed results. 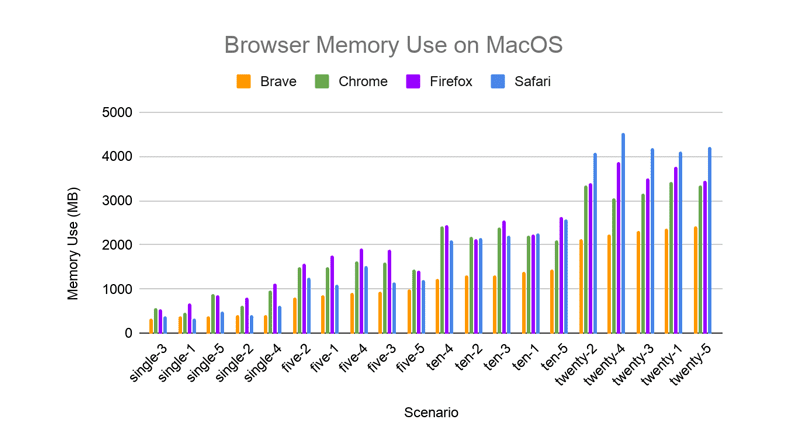 Brave 1.0 was released on November 13th and received very positive press reviews, and also saw a surge in user adoption. Brave went from 8.7 million monthly active users in October to 10.4 million MAU at the end of November, a 19% increase across all platforms. This represents a doubling of Brave’s MAU in one year. Daily active users tripled this year, to 3.3 million. The Brave browser combines privacy with a blockchain-based digital advertising platform, and offers 3-6x faster browsing than other browsers.

Brave Shields, which protect users’ privacy from trackers and ads, are one of the cornerstone components of the browser involved in handling every single web request made for loading a website.